Donations to The Food Fight Fund will help Vermont establish its labeling law and mount a powerful defense against any lawsuits. To learn more about the Fund or how you can contribute, please visit our donation page.

Following is Governor Shumlin’s press release that followed the bill signing ceremony on May 8, 2014.

Joined by farmers, environmental groups, businesses – including Ben & Jerry’s CEO Joshon — and others from across the country, Vermont Gov. Peter Shumlin today signed a first-in-the-nation law requiring the labeling of food produced from genetic engineering.

“Vermonters take our food and how it is produced seriously, and we believe we have a right to know what’s in the food we buy,” Gov. Shumlin told the crowd gathered on the State House lawn for the signing event. “I am proud that we’re leading the way in the United States to require labeling of genetically engineered food. More than 60 countries have already restricted or labeled these foods, and now one state – Vermont — will also ensure that we know what’s in the food we buy and serve our families.”

Speakers at today’s event included Rural Vermont board members ,farmers who first met at a ‘kitchen meeting’ of advocates focused on genetically engineered foods, as well as 11-year-old Brigid Armbrust, who attended legislative committee meetings, launched a letter-writing campaign in support of labeling and pushed to get young Vermonters involved in the issue.

“I’m so proud of the state I live in,” Armbrust said. “I feel like this is a wonderful step toward a healthier world and I’m so glad Vermont is the first to take it!”

The Governor signed the bill into law as a local band played, the crowd enjoyed the sunshine on the State House lawn, and the Ben & Jerry’s Scoop Truck dished out free ice cream. Ben & Jerry’s CEO Solheim, who spoke at the bill-signing, said all his company’s products will carry a label indicating they source only non-GMO by the end of 2014.

“We’re so pleased that this law will further enhance the reputation and trust in the Vermont brand that has been so important to our company’s identity,” Solheim said.

Under the new law, food for human consumption offered for retail sale in Vermont that is entirely or partially produced with genetic engineering must be labeled to indicate this fact, as of July 1, 2016. Violators face penalties and further action by the Attorney General’s Office.

In addition, the bill creates a special fund to support the implementation and administration of the state labeling law, including costs and fees associated with expected challenge in court by food producers who do not want to disclose this information to consumers. Information about donating to the fund can be found at www.foodfightfundvt.org.

“The constitutionality of the GMO labelling law will undoubtedly be challenged,” said Vermont Attorney General William Sorrell. “I can make no predictions or promises about how the courts will ultimately rule but I can promise that my office will mount a vigorous and zealous defense of the law that has so much support from Vermont consumers. I thank the Governor and the Legislature for ensuring we have the resources we need to get the job done.”

“There is no doubt that there are those who will work to derail this common sense legislation. But I believe this bill is the right thing to do and will gain momentum elsewhere after our action here in Vermont,” said Gov. Shumlin. “As you know, we’re in the middle of an agricultural renaissance in Vermont because more and more Vermonters care about where their food comes from, what’s in it, and who grew it. It makes sense that we are again leading the nation in this important step forward.” 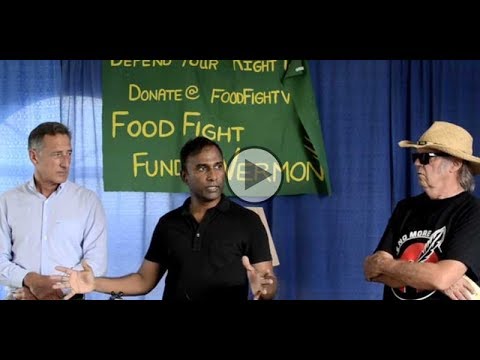